What I liked about this year's augmented reality headsets at #AWE2016 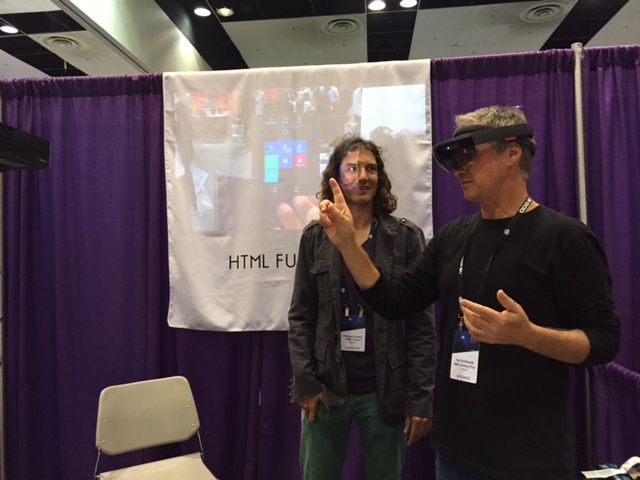 If I would take away one major thing from last week’s Augmented World  Expo in Santa Clara, it's that hardware is still king. AWE's main  sponsor this year, ODG, focused on showing off their next generation of  head displays. Their current product is the R7, which was released last  year.

Here's a recap of some of the companies and headsets I saw:

I've seen significant improvement of the augmented and mixed reality headsets over last year. The Moverio BT-300 made the most impressive jump. We currently have the BT-200 at the  office; it's clunky, heavy, and hard to use for more than an hour. The  new BT-300 is very light with a much nicer display. The glasses are  still tethered to an Android-like device, providing simple touch control  to the glasses.

Optivent showed a prototype of their new ORA-2,  which is similar to the BT-200. We have the ORA-1, which looks like a  homemade, 3D-printed prototype. The ORA-2 is much slicker and light.  Optivent has made great improvements in the device's power, performance,  and ability to use your own glasses. For a single-eyed head-mounted  display, it's a great value.

Atheer was demoing their AiR glasses,  which target a range of industries, including industrial, energy,  insurance, health care, logistics and warehousing. They have their own  basic user interface for specific scenarios and a very cool remote  assistance communication tool. Their device includes a wide array of  gesture recognitions, making the user interface practical.

I sadly did not get a chance to test the Daqri Smart Helmet,  which are glasses embedded into a hardtop helmet, so I can't speak to  the device's capabilities. They did have a very nice booth.

I was lucky to be able to try the Meta 2 -- and, yes!! The field of view is very comfortable. Even though our  demo room was dark, the display felt very bright and the small text was  totally acceptable.

Unfortunately, the version of the device I was using did not have any  on-board SLAM, so I was not able to test the head positioning and mixed  reality features.
The hand gestures were clever and working pretty well. It’s nice to have more than one gesture available.

We brought this as our main demo. We talk about the Hololens on this blog all the time,  so I won't recap. I will say I was surprised Microsoft was not present  at this conference. A few other attendees had headsets, but only  Accenture and Vuforia were demoing Hololens applications. And HTML  Fusion and Vuforia were the only ones demoing custom applications.

As of today, I believe only the Hololens qualifies as mixed reality  glasses. The next closest thing would be the Meta 2 -- I'll be able to  confirm when I try a version with the SLAM. I also plan to do a  follow-up post here on the difference between mixed and augmented  reality, which came up a lot as a question at our booth.

In terms of software, we found a wide range of classic AR for tablets  and phones mixed with a fair amount of augmented reality training and  remote assistant solutions.

Vuforia and ARToolkit both had very nice boothes. It’s nice to see Daqri financing and supporting the open source ARToolkit.

Beyond AR, Augmented World Expo also covers wearable tech and VR,  which were also interesting. I’m hoping to cover this in another blog  post.